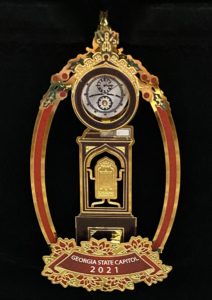 This year’s ornament features the E. Howard Astronomical Regulator clock that currently stands inside the Governor’s Office. This beautiful tall-case clock, ca. 1870, was originally valued at $700 and was one of the very best timekeepers available at the time. First used as the standard regulator for the Western and Atlantic Railroad, a lessee of the State of Georgia, by 1917 it became the official timepiece for the Nashville, Chattanooga and St. Louis Railroad, located at the NC and StL’s Hills Park yard office, just south of North Avenue in Atlanta. As such the clock has been part of the financial and industrial development that the expansion of the railroads brought to Georgia’s economic history. It was returned to the State and stood guard outside the Governor’s Office for many years. Restored in 1998 by the National Association of Watch and Clock Collectors Atlanta Chapter 24, the clock amazingly keeps time within one second a month over 100 years after it was made.